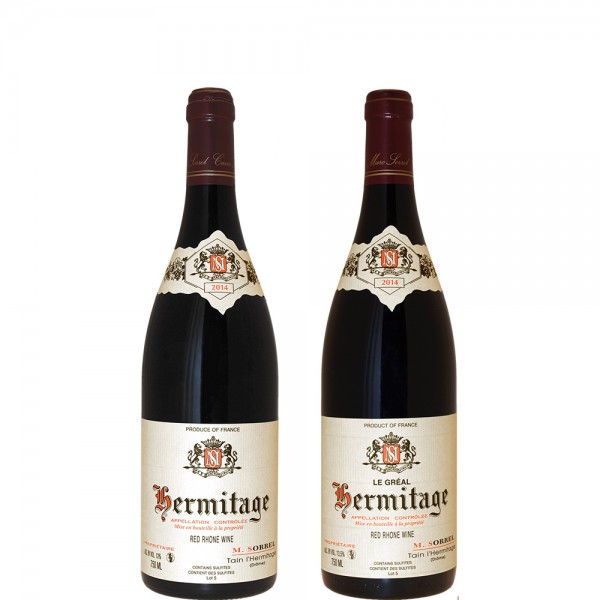 Presse / Kritik
"Greal"
Decanter: 96 / 100 Punkte
Matt Walls' top scoring wines from the Rhône 2016 vintage
Wine Advocate: 94-96 / 100 Punkte
"The 2016 Hermitage Le Greal comes from Le Méal (85%) and Les Greffieux (15%). The vines are a substantial 60 years old, and with the April hail, only yielded 20 hectoliters per hectare. The wine is inky dark and concentrated, with firm tannins and attractive hints of licorice."
J. Livingstone-Learmonth: 4 / 6 Sterne (Leading 2016 Hermitage Reds)
"Dark red; there is a cassis burst on the nose, hedgerow fruits, a tarry backdrop. It keeps up well, prolongs, has lift. The palate links well to the nose, serves rolling gras richness, a good continuous run of red fruits, raspberry and mulberry; the gras richness lasts OK. It’s not especially deep in fact, but is continuous. It’s a tricky vintage wine, I feel. The elements are separate now, not an ensemble. The tannins crunch out on their own at the end. It gets a bit vegetal on the close, which is smoky, and it needs to be allowed time to fuse. I usually find the two Hermitage reds more apart in quality than this. “The yield effect has closed the gap,” Marc Sorrel. From 2023. 2037-39"

"Classique"
Decanter: 94 / 100 Punkte
Wine Advocate: 92-94 / 100 Punkte
"From barrel, the 2016 Hermitage is impressive. Produced from yields of only 20 hectoliters per hectare, it's more concentrated than normal, showing intense dark fruit and firm tannins."
J. Livingstone-Learmonth: 4 / 6 Sterne (Leading 2016 Hermitage Reds)
"Dark robe. There is intensity, thickness on the nose, blackberry fruits piled deeply, mulberry also, licorice – it has a sweet tenor. The palate is broad, rich and fluid, based on red fruits, again sweetness present, lozenge time. The tannins are squeezy, dense, give a couch to the second half. The fruit has some brightness that helps it along. This has a thorough, fat style, is concentrated from its low yield. It’s like 2014 but more structured, rich. There’s late fresh lining and tannin rockiness. It isn’t as full all through as it seems on the surface – its “plenitude” or fullness is from low yields more than a solar vintage, so it isn’t completely thorough in effect. 50% destemmed. From 2021-22. 2034-36"